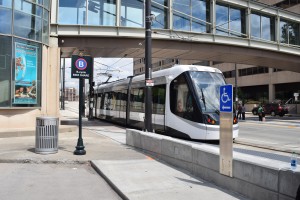 KC Streetcar riders will notice some changes today around the Union Station outdoor East Plaza Terminal area, which is adjacent to the KC Streetcar Union Station stop.  The project is expected to be completed early November 2016.

Changes to the East Plaza Terminal area will include: Single-level platform modifications to make the area more ADA-friendly; Additional seating areas for waiting riders; A lighted pathway to and from the Station; and enhanced landscaping with public art elements.

Construction of the new East Plaza Terminal began on Monday, August 22nd.  The area immediately adjacent to the streetcar platform will be completed first, with continuous access to the Union Station Streetcar stop open at all times during construction.  The work will then progress to the north with completion of the project in eight to ten weeks, weather permitting.  Clearly marked pedestrian re-routes will help guide guests to and from the Union Station Streetcar stop, with a focus on maximum maintained convenience for visitors and Station tenants alike.

The project will also include a permanent aluminum and bronze sculpture – as part of Kansas City’s One-Percent for Art Program – to serve as one of several focal points in the new area.  Inspired by murals of hometown artist Thomas Hart Benton, artists Gail Simpson and Aris Georgiades created Transporters – a sculptural blend of multiple forms of transportation – to publically share history in the new East Plaza garden.  One such sculpture is already located on top of the Union Station Streetcar terminal.