The City of Kansas City, Missouri’s Finance Department recently released sales tax receipts for those businesses within the downtown Transportation Development District, or TDD, for the 2016 City Fiscal Year.

“The sales tax numbers released today confirm what we already knew, that our downtown streetcar has been catalytic in spurring $1.8 Billion in downtown development and is serving as an economic engine for downtown business.  Our City and our downtown is on a roll and our task now is to keep it moving,” said Mayor Sly James.

The downtown streetcar TDD was created to fund the capital, operations, and maintenance expense of the streetcar starter line. The KC Streetcar operating and maintenance budget is comprised mostly of funds collected within the TDD, including a one percent sales tax. The calculations for the property assessments can be found here.

“We are thrilled to see the new developments, new residents, and new energy translate into increased activity and sales for downtown business,” said Tom Gerend, executive director of the KC Streetcar Authority.  “This was our goal and that was our hope with this project from the very beginning.  Not only does the sales data bode well for existing business but it also reinforces that our streetcar operations and maintenance program will continue on a very solid financial footing,” continued Gerend. 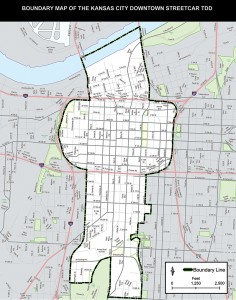