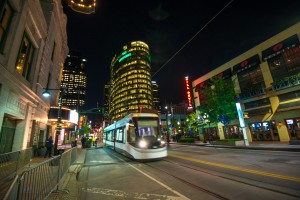 The Kansas City Streetcar was developed to support the city’s downtown revitalization after voters approved sustainable funding through local taxes in 2011. The area within two blocks on either side of the streetcar route is home to 65,000 employees and 4,600 residents; and more than 10 million people visit destinations of interest in the corridor annually. Since the streetcar project was announced, the area has welcomed more than 40 development projects totaling about $1.8 billion in economic activity, and ridership has far exceeded expectations.

Propelled by an active partnership between the City, Kansas City Streetcar Authority (KCSA), Kansas City Area Transportation Authority (KCATA), Mid-America Regional Council (MARC), Jackson County, Kansas City Downtown Transportation Development District, and HDR (as the lead planning and design firm), the streetcar project moved from the alternatives analysis phase to final design in less than two years. Design was completed in March 2014, and construction was completed at the end of 2015, followed by a period of testing before opening to the public in May 2016.

“Public transit is the type of infrastructure that inherently promotes sustainability,” said ISI President and CEO William Bertera. “Providing mobility options and reducing congestion improves quality of life and strengthens cohesion within a community. The Kansas City Streetcar has incorporated additional sustainability features throughout its planning and design – not only in the physical design features, but in its strategy for sustainable growth and economic development, and long-term management of stakeholder processes and community relationship-building.”

“We are honored that Kansas City is being recognized for its sustainable practices,” said Kansas City Mayor Sly James. “The KC Streetcar showcases sustainability, which is a guiding principle across many levels of our city’s operation.”

“Kansas City’s streetcar project has all the hallmarks of a sustainable endeavor that will truly thrive,” said HDR Area Manager Joe Drimmel. “HDR designed the streetcar as a fully integrated transportation system to support the city’s focus on Main Street as a key corridor for sustainable economic development, and to foster a sense of community and identity. The success is evidenced in the $1.8 billion in economic development that has initiated in the vicinity of the streetcar corridor and the more than half a million riders that have already traveled on the streetcar. HDR is very proud to have collaborated with the City to help make their vision for sustainable transit infrastructure a reality.”

The Envision rating system from ISI measures sustainability in infrastructure projects in five categories: Quality of Life (QL), Leadership (LD), Natural World (NW), Resource Allocation (RA) and Climate and Risk (CR). These contribute to the positive social, economic and environmental impacts on a community during the planning, design and construction of infrastructure projects.

Envision categories with the highest scores for the Kansas City Downtown Streetcar project include:

The streetcar provides an alternative mode of transportation that improves mobility and accessibility for a heavily developed urban area, within walking distance to a mix of commercial, office and residential uses. It is providing “last mile” connectivity to other regional transit services, integrating with bicycle and pedestrian facilities, and providing an alternative to automobiles in the downtown area. Designers took care to enhance public spaces while preserving urban aesthetics and neighborhood character to further improve the overall quality of life.

Resource Allocation (RA): The project was designed and constructed to minimize waste generated by the project, re-use or divert waste from landfills, and to implement green infrastructure solutions where possible. Construction materials made of recycled content were used, and construction waste was limited by reusing and recycling construction materials to the extent practicable. For example, approximately 47 percent of the Singleton Yard contains recycled content and nearly 90 percent of the Singleton Yard construction waste was diverted from the landfill. Furthermore, all 845 tons of steel used for the streetcar tracks were made with recycled metal scrap. The project team also took several measures to minimize the amount of excavated material that had to be taken off-site. Concrete removed during construction (from sidewalks, driveways and pavement) was crushed into recycled aggregate and reused in project construction, and all scrap metal was recycled. The planning and design also carefully considered water management and stormwater runoff for both the Singleton Yard and the streetcar tracks themselves. Strategies to control erosion, minimize post-development site runoff and encourage groundwater recharge were implemented. In fact, the post-development stormwater runoff levels are below pre-development levels.

The project also scored highly in: “Leadership” (LD), due to its deeply collaborative planning and design processes and long-term visioning approach; and scored highly in “Climate and Risk” (CR) due largely to the system’s resilient design for winter weather.