Thanks a Million, Kansas City!

The Kansas City Streetcar Marks Its One Millionth Ride 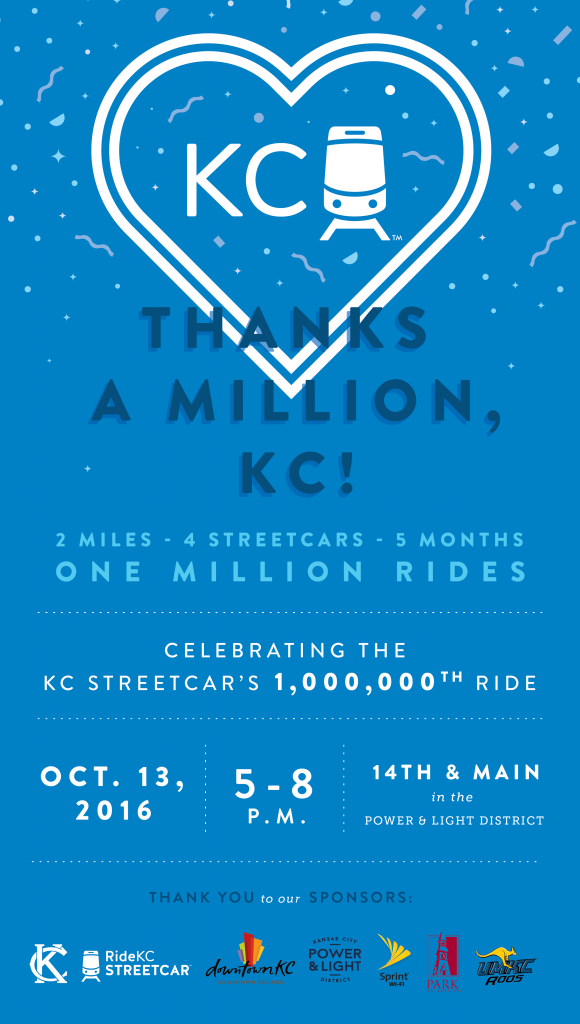 In just 5 months of service, the Kansas City Streetcar completed its one millionth ride.

During the lunch hour, on Friday, October 7, the Kansas City Streetcar marked its one millionth ride.  As a sign of appreciation, Mayor Sly James, the entire Kansas City Streetcar team and downtown partners are saying “Thank you” to all those that made this milestone possible with a “Thanks a Million, KC!” community celebration on October 13, from 5:00 p.m. – 8:00 p.m. along 14th Street, between Main Street and Walnut Street, in the Kansas City Power & Light District.  There will be games, giveaways and live music provided by Art in the Loop performer, Amado Espinoza, local funk/rock/soul band The Phantastics and live art provided by J.T. Daniels.

Since opening day, streetcar ridership has steadily increased with a daily average of 6,600 passengers. The previous projected daily ridership average was 2,700. Weekends tend to be the busiest, with the highest ridership day of 15,780 being on July 16, a Saturday.  July saw the highest ridership totals with 233,683 rides during that month. Since May 2016, the Kansas City Streetcar fleet has traveled a combined 64,796 miles.

“The Kansas City community is riding the streetcar in far greater numbers than anyone ever imagined and today we say “thank you” for the amazing support. It is our hope this is just the beginning and a sign of even better things to come,” said Tom Gerend, executive director of the Kansas City Streetcar Authority.

Streetcar ridership, otherwise known as Unlinked Passenger Trips, is calculated by Automated Passenger Counters (APC) located over each door of each streetcar. Passengers are counted as they board and exit the streetcars, and the data collected shows which stops are the most used and which hours of the day are the busiest.  The ridership data is downloaded daily and reviewed by a third-party for accuracy. During July, members from the Ride KC team performed thirty manual passenger checks in order to check for accuracy. The conclusion of that activity was that the APC counts are within 1.4% accuracy of the manual counts.